I’ve been fairly busy lately. We’ve had various bank holidays here in the UK and when you get a free day off, I think it’s good to do something with it!

The first bank holiday – Good Friday – was spent with friends wandering the Clent Hills and having a pub lunch and an ice cream. I’d never been there before which is shocking considering how lovely it is round there and how close to home it is.

Three days later on Easter Monday, most of the same friends, as well as one or two others, joined me at Rutland Water. It’s a large reservoir created in the 1970s. We hired bikes and cycled around it for the day, which was very pleasant except when going up hills! I haven’t really done any cycling aside from occasionally in the gym for about 10 years, so they were challenging! It also didn’t help that my friend Zoe and I mistakenly ended up with road bikes instead of mountain bikes. Still, it was a great day, helped by sunny weather and a fortuitous discovery of an entrepreneurial village hall selling bacon baps, cups of tea and homemade cakes! 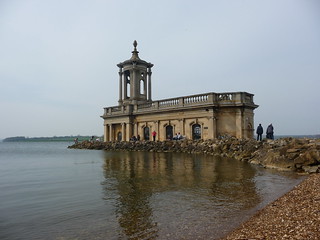 There was another bank holiday last Monday (this time of year is full of them) and we walked from my friends’ house onto the North Worcestershire Path, wandering across fields in the direction of a pub we’d heard was good – and indeed, it was!

Then on Wednesday, I took the day off and drove my brother and I to Snowdonia in North Wales. The journey took three hours but it’s great to get away from urban life and into wild countryside when you can. We intended to climb Tryfan, which had recently been voted the best mountain in the UK, then its neighbours Glyder Fach and Glyder Fawr. Tryfan itself proved a challenge, because despite there being paths marked on the map, there’s little to no evidence of them on the ground! We had to scramble and climb our way over broken rocks all the way to the top. Don’t get me wrong, it was fun but it was mostly scrambling rather than walking. Some of it was practically rock climbing! It took a lot longer than we anticipated and as we looked at the very steep scree slope we’d have to climb to get up the side of the next mountain, we called it a day and headed home early. Next time, we may approach from the south! We did see some RAF jets flying past us, which was quite exciting. In fact, they were flying lower than us, which must be quite rare! I didn’t manage to get my camera out in time to take a photograph unfortunately. 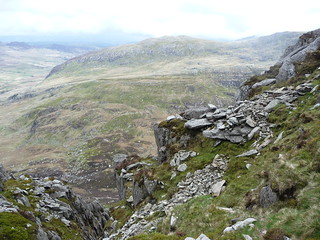 View from Tryfan – one of the less rocky sections!

The other thing I’ve been up to recently was The Wolf Run. It’s an off-road 10km run with obstacles, including a 60m lake swim, a giant slip and slide, walls to climb, a large cargo net, monkey bars and mud. Lots of mud. Some of it you had to crawl through, some you had to wade through, and some you had to try to run over. I’d be lying if I said I hadn’t slipped over! It was fantastic fun and a lot easier than I was expecting. A couple of the obstacles were tricky but it’s a run not a race so there was always someone willing to help you out. I was expecting the lake swim to be utterly horrendous and not to be able to move afterwards from the cold, but it actually wasn’t that bad at all. It looks like we’re running it again in November so ask me again after that!

Apparently blogs need to cover a certain niche in order to attract readers. My aim is not to attract readers. I don't deny it would be nice not to just be spouting to myself, but the reason I set this blog up was to give myself somewhere to write down my thoughts. If anyone reads them, that's a bonus. This blog will cover a mix of things - anything that comes to mind that I want to write about. I make no promises about how often I will publish new content.
View all posts by elentari86 →
This entry was posted in Adventure, Physical Challenge, Walking and tagged bikes, Clent Hills, cycling, North Worcestershire Path, rutland water, The Wolf Run. Bookmark the permalink.